Concession drinks by Catksill Brewery.  FREE CONCERT!   Suggested donation of $15 in support of the Arts 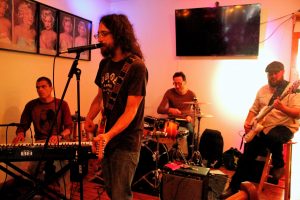 Talking Fire is a fiercely creative and independent quartet from the Catskill Mountains. The brainchild of poet Richard Traviss, they combine reggae grooves with conscious lyricism that invites the listener to participate in freely expressing themselves. They craft genuine and captivating anthems on topics such as true love, spirituality, equality, and herbal tea. Their forthcoming EP “Angels Everywhere” is slated for a Summer 2018 release.

Feature performance by BETHANY & RUFUS with BONGA JEAN-BAPTISTE at 9:30 pm 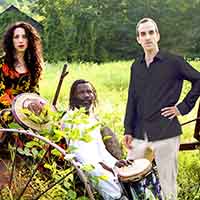 Conjuring the ancestral traditions of the old world and the new, the group weaves the earthy folk music of the Americas with the ceremonial Vodou traditions of Haiti. It is a thrilling and unexpected synergy of song, culture, rhythm and blues.

Bethany Yarrow (vocals) sings music of power and praise. She is a song keeper, earth activist, and student of the spiritual traditions of the Americas. Onstage she is a mesmerizing, dancing spirit with a powerful voice and a living prayer for unity at the heart of her music.
​
Rufus Cappadocia (strings) is a a multi-lingual musician, composer and recording artist. He is a virtuoso cellist known for his transcendent improvisation and groundbreaking percussive style. Spanning the modalities of Middle Eastern, West African, pan-European, and American folk forms, Rufus’ effortless and natural embrace of music is awe-inspiring.

Bonga Jean-Baptiste (percussion, vocals, kalimba) is a master drummer and a repository of Haitian rhythm, dance and song. He is a pioneer of Haitian Racine music and a founder of the seminal Haitian roots bands, Boukman Eksperyans and Foula.
​
Individually all of the members of the group have been instrumental in expanding the role of traditional forms in their respective music: Bethany, the daughter of legendary 60’s folk singer Peter Yarrow of Peter, Paul & Mary, draws from a rich legacy of American folk music; Rufus is noted for his astonishing collaborations with folkloric artists from around the world as well as his solo cello repertoire; and Bonga descends from an original lineage of Vodou ceremonial drumming and folklore.

Together these musicians are a force for good in the world of music, and the world at large. Inside the powerful vocals, polyrhythmic groove and traditional melodies, there is a message of peace, respect, unity, and connection that reaches out to audiences across language and time.