It’s the 30 year anniversary of the release of Dirty Dancing and we’re celebrating with a Bang! Join us for a screening of the classic Catskills love story of Baby and Johnny. At 5:30, there will be a special introduction and Q&A with Jackie Horner, the real life inspiration for Penny, and true tales of the Catskills golden years. Stick around for a bonus screening Bang! The Bert Berns Story, a new documentary about the life and career of 1960’s songwriter and record producer, Bert Berns.

The Sullivan County Museum is partnering with the Hurleyville Arts Centre to display some Borscht Belt memorabilia.

Baby (Jennifer Grey) is one listless summer away from the Peace Corps. Hoping to enjoy her youth while it lasts, she’s disappointed when her summer plans deposit her at a sleepy resort in the Catskills with her parents. Her luck turns around, however, when the resort’s dance instructor, Johnny (Patrick Swayze), enlists Baby as his new partner, and the two fall in love. Baby’s father forbids her from seeing Johnny, but she’s determined to help him perform the last big dance of the summer. 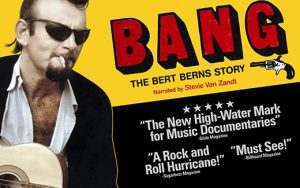 Music meets the mob in this biographical documentary, narrated by Stevie Van Zandt, about the life and career of Bert Berns, the most important songwriter and record producer from the sixties that you never heard of. His hits include “Twist and Shout”, “Hang On Sloopy”, “Here Comes The Night” and “Piece Of My Heart.” He helped launch the careers of Van Morrison and Neil Diamond and produced some of the greatest soul music ever made.

December 19, 2017
Thursday Dec. 4 screening cancelled due to weather. Rey develops her newly discovered abilities with the guidance of Luke Skywalker, who is unsettled by the strength of her powers. Meanwhile, ...