The goal of the Summit is to foster community building between Nations. To bring together traditional teachings and contemporary minds to imagine ways forward for our people. To recognize that while there is much talked about suffering and trauma in and about our communities we are also growing, thriving and have a lot to teach about how to find strength in laughter, joy and respect for other living things.

Online artist’s demos and virtual panel are by donation with registration. Summit Saturday pass $30.00. Gallery viewing Q&A, Artists Talk, Live Music have Limited in-person seating at Gallery 222. All pass holders will have an opportunity to meet the artist’s.  Proof of Vaccination Required.  All virtual & Hybrid events will be recorded and available to view after event. 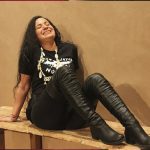 Jennifer has been singing since she was a child.  When she was seventeen, she joined the critically acclaimed Native women’s Trio ULALI. Her voice perfectly wove the high strand of Ulali’s renowned harmony with incomparable skill and grace for over twenty years. Together, they created a new sound in Indian Country. Jennifer’s sharp wit and stage presence infused Ulali’s shows with strong vocals, humor and camaraderie with the audience.

Jennifer is frequently called upon to guest lecture and conduct vocal workshops at universities, schools, in Native communities and at festivals throughout the United States and Canada. She has worked in film and television and has toured with renowned musicians throughout the world. 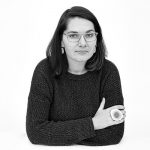 Born and raised in northern New York, Margaret Jacobs is a member of the Akwesasne Mohawk Tribe. She is a 2018 awardee from the Rebecca Blunk Fund through New England Foundation for the Arts, a 2019 recipient of the Artist in Business Leadership Award through the First Peoples Fund and was a 2021 Visiting Artist at Franconia Sculpture Park in Shafer, MN.

Jacobs has participated in several artist residencies including at the Vermont Studio Center in Johnson, VT where she received a Native American Fellowship through the Harpo Foundation. She has shown at galleries and juried art markets throughout the United States including at Boise Art Museum in Idaho; 516 arts in Albuquerque, NM; and the Smithsonian NMAI in Washington, DC. Her work has been featured in print and online press including at mic.com in the article 11 Native American Artists Whose Work Redefines What it Means to be American.

Jacobs is known for her sculpture, jewelry and drawings and she uses all three approaches to explore the tension and harmony between natural and man-made, often intermingling unexpected and contradicting materials to explore those relationships. 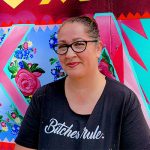 Mona Cliff (Aniiih)is a multidisciplinary indigenous visual artist, she explores the subject of contemporary Native American identity and culture through her use of traditional Native crafting methods such as seed bead embroidery and fabric applique. Mona has embarked on a new series of regalia which explores the concept of native futurisms. Beadwork & sewing applique have been a primary foundation of her artist practice.

Mona acquired a B.F.A in Printmaking from Cornish College of the Arts in Seattle, WA. After graduating Mona pursued beadwork as a way to Re-indigenize her art practice after a western based art education. Honoring native culture, She has continued to work on her art combining contemporary subject matters with indigenous methods of crafting. Her art also focuses on how traditional arts are passed down between generations of women, thus influencing culture.

Mona pursues the concepts of generational knowledge while exploring other topics such as native futurism and identity. Her beadwork is included in the traveling exhibit The World of Frida, exhibited in the U.S for the next 2 years. Her recent work of a beaded QR code was included in an exhibit at the Abrons Art Center in NYC. Mona’s art was selected for an art exhibit and awarded travel to Cape Town, South Africa. Mona has recently concluded a public art grant through Art Place America and the Lawrence Arts Center in which shel focused on community public art. Her project Natives NOW focused on bringing visibility to the local native community, using portraiture, projections and a mural that interweaves elements of traditional native regalia overlayed with botanical renderings of indigenous fruits of the Kansas area, as well as Osage language.
She is currently working on a commissioned installation for the Kansas City Museum, where she is incorporating seed beads as a way to work in harmony and honor nature’s forms. Her newest work can be seen at Form & Concept in the exhibit Hand Tools of Resilience.
Mona is married and has 3 children ages 10, 11& 13 years old. She currently resides in Lawrence, Kansas.
Mona Cliff is an enrolled member of the Gros Ventre tribe (A’aninin/Nakota Nations) she is Frozen Clan(Aniiih) and of the Medicine Bear Clan(Nakota) of Ft. Belknap, MT

Erin Lee Antonak is a Wolf Clan member of the Oneida Indian Nation of New York. She is a graduate of Bard College and studied at Lacoste School of the Arts, France and at Vermont Studio Center. Erin has worked in various museums and art galleries developing, designing, and building exhibitions for over 20 years. She has also organized and curated shows in Europe, Asia, and North America. Her own artwork fuses traditional Iroquois sensibilities and craft techniques with contemporary materials and concepts. She is currently Curator of Art at the Ohr-O’Keefe Museum, Biloxi, MS and serves as a Yale University Morse College Fellow.

Mary V. Bordeaux (Sicangu Lakota) is the co-founder and creative director of Racing Magpie, a collaborative space with a Native art gallery and artist studios in Mnilúzahaŋ Otȟúŋwah (Rapid City, SD). She received her bachelor’s degree from the Institute of American Indian Arts and MFA from the University of the Arts, both degrees are in museum studies with an emphasis in exhibition design and planning. Mary is currently a doctoral candidate at Saint Mary’s University, exploring Lakota women’s leadership. Mary has held curatorial positions with The Heritage Center at Red Cloud Indian School and The Indian Museum of North America at Crazy Horse Memorial. 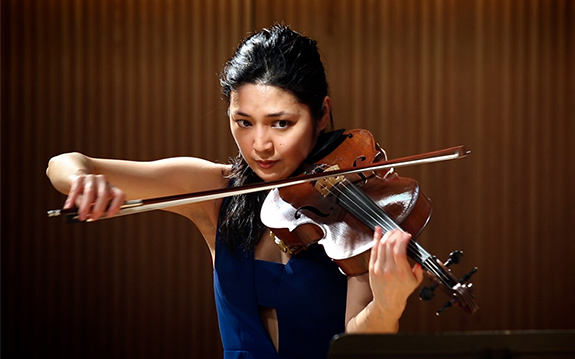 SCCO: Art of the Quartet 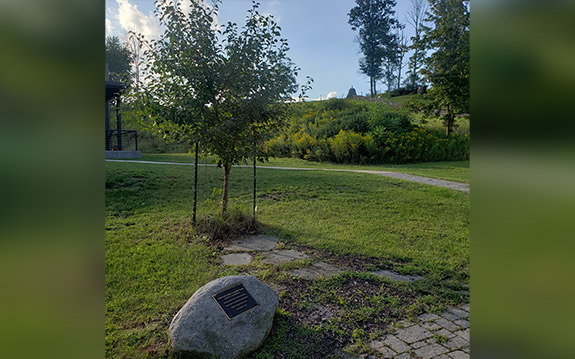 Three Trees First Responders  | Survivors  |  The Arts September 11, 2021 Free and open the public, visit the trees in a self guided stroll to honor the bravery of the thousands of First Responders, Survivors and The Arts. The Survivor Tree s...

SCCO: Art of the Quartet

Three Trees First Responders  | Survivors  |  The Arts September 11, 2021 Free and open the public, visit the trees in a self guided stroll to honor the bravery of the thousands of First Responders, Survivors and The Arts. The Survivor Tree s...

2nd Annual Indigenous Womens' Voices Summit Celebrating and igniting creative change. The goal of the Summit is to foster community building between Nations. To bring together traditional teachings and contemporary minds to imagine ways forward for...

The Sullivan County Chamber Orchestra's mission is to serve the community and elevate the quality of life for all generations through artistic expression and cultural experiences; to inspire a viable renaissance; promoting a positive economic resurge...

Hurleyville Performing Arts Centre is delighted to host multidisciplinary Colombian and Japanese born artists Ximena Garnica and Shige Moriya with their New York City-based LEIMAY Ensemble for a performing and teaching residency during the month of A...

A day party and carnival celebrating love, self-expression and the magic of summer in the Catskills. Celebration and entertainment for all ages, all people, all humans and creative creatures, brought to you by House of Yes & Friends Read more A...

This event has been rescheduled for in-person 2022 From the earliest minstrel and vaudeville shows through the world class entertainment offered by the big hotels to the Catskill Mountain Shakespeare Festival and 75 years of summer stock, Sullivan C...

This talk is rescheduled for Spring 2022 Although not much has been recorded about any 19th century Sullivan County women who might have been involved in the suffrage battle, there were a number of local women who became very involved in the movemen...

Is there such a thing as a queer plant? A queer garden? Well what does queer mean anyway? In this 40-minute presentation by theater scholar and local landscape gardener Mimi McGurl will answer these questions and more. Beginning with some basic scien...