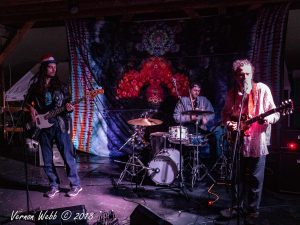 “The Electric Chords are a modern power trio with a soulful, energizing sound that is as original as it is classic. Hailing from the Catskill Mountains of NY, their music blends tones of Rock, Jazz, Blues and more in a unique performance that is both familiar, and refreshingly new.”

With Fred Thomas of the JB’s  featuring Chris Rob | 8:30pm

James Brown Tribute Show is led by Fred Thomas; James Brown’s Bassist of over 36 years. This is a soulful and energetic show paying tribute to James Brown’s musical style, energy, and songs.

The show has been performed in many venues across the world and under different names all with the sole purpose of bringing to the audience the experience of a fun, live performance of Soul and Funk music.

Fred Thomas “is the most sampled bass player in the world!” – James Brown
No matter how hard Mr. Brown worked, if it were not for his voltage enhanced sidemen, there would be no soul – hence no Godfather! Brown’s rhythm section bassists are legendary, boasting the extraordinary talents of Bootsy Collins, David “Hooks” Williams, Bernard Odum, Hubert Perry, Tim Drummond, Bob West, and Charles “Sweet” Sherrell, among others, and my personal favorite – Fred Thomas. Mr. Thomas, who somehow was able to articulate the JBs’ killer up-tempo passages with this right thumb exclusively plying down-strokes, served The Hardest Working Man in Show Business for thirty plus years, distinguishing himself of such seminal Brown sides as the live Revolution of the Mind (1971), Get On the Good Foot (1972), and The Payback (1973), among other LPs. That’s Fred on “Hot Pants,” “Papa Don’t Take No Mess,” and Make It Funky Part I” to cite a few. Fred’s deep tone, perfect note choices, and rhythmic variations are further proof that you don’t have to be flashy to be funky! Fred Thomas is still grooving in the studio and on the bandstand as a leader and an in-demand collaborator.

Born and raised on Chicago’s south side, Chris Rob has established himself as a renowned keyboard wizard, passionate vocalist, songwriter and go-to producer. He most recently co-produced “Right On Brother” featuring the great Stevie Wonder along with industry heavyweight DJ Spinna. This hypnotic soulful house-jazz piece was included as the finale of Robert Glasper’s Miles Davis remix project “Everything’s Beautiful”, and received rave reviews from Rolling Stone.

He performs with the likes of comedian Dave Chappelle, R & B legends Nile Rogers and Anita Baker, hip-hop artists Rakim and Talib Kweli. Rob has appeared on The Oprah Winfrey Show, The Grammy Awards, VH1’s Hip Hop Honors, as well as Last Comic Standing. Chris Rob’s goal is to first and foremost connect to the audience, using genuine and heartwarming lyrics to tap into their souls.

Being in love with music his whole life Anthony Hernandez Jr. is a self taught musician beginning before he could fully walk. Anthony plays bass, keyboard, writes music, but, drums you could say, were and remain his gateway instrument. Anthony has been playing as a free-lance drummer with many, many acts and in practically every genre since a teen.
Anthony is a native New Yorker who has created the up and coming Mighty Tee Entertainment company; an all encompassing music enterprise that provides for all of your musical entertainment needs such as DJ services, band member recommendations, backline and event lighting.

Kaori plays r&b, funk, soul, pop, salsa and jazz. Kaori “Kiki” Nakajima was born in Tokyo and raised in the country side of Japan. She studied at Tokyo College of Music High School and Tokyo College of Music, and received a Bachelor’s Degree in Music Performance. After graduating from school, Kaori’s had her major debut from Epic Sony with rock band “54 Nude Honeys.” She gigged continuously, supporting artist such as Ben E. King, The Stylistics,Three Degrees and top acts of Japan, and can be heard on many recordings for pop, funk and soul artists and in commercial music for film and TV.

Kaori moved to New York in 2013 and right away met Fred Thomas, longtime bass player for James Brown. Since then, she has become a permanent member of Fred’s band. She also plays opening numbers every Friday at the Fat Cat with Naomi Shelton and Gospel Queens and can be heard around town with various groups.

Maichael is a member of the Daptone recording along side such as The Budos and the Menahan Street Band. In addition to world renowned bass player from the J.B.’s, Fred Thomas, h e has toured, performed and emcee’d for the acclaimed Charles Bradley and his Extraordinaires.

Tyrone Cox – Trumpet
Born in Charlotte, Nc. I begin Playing Trumpet at an early age. After moving to New York City I became a Studio Musician and recording artist and also vocalist in the late ’60’s . During the early 70’s i became a founding member of the Crown Height Affair and i did recordings for the Imperials, Gwen McCray, France Joli, Denroy Morgan, Brass Construction, Taana Gardner. unlimited touch, Xavier, Sky And Many more. I have performed with Ben E King, Wilson Pickett, Lloyd Price, Lloyd Diamond, The Drifters, The Winans and the Last seven years with the one and only Fred Thomas of the JBs I also teach and instruct in some elementary schools throughout Brooklyn, NY